I'm Holly, and this my blog. I'm a web designer and developer currently living in Houston, Texas.

This is the place where I post about my life, my work, my thoughts, my opinions, "and the other things," that make up who I am.

I recently found out that I had won the Spring 2012 Quarterly Scholarship for the Web Design & Interactive Media program at my school. This scholarship is based on academic merit and dedication to one’s field of study. It was a big surprise for me to win it because it isn’t the sort of scholarship that you apply for; you have to be nominated for it. 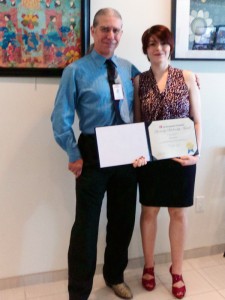 Yesterday, went to the luncheon for the scholarship winners, and was presented with a certificate by the chair of the Web Design & Interactive Media program.

How .htaccess Saved the Day

I recently launched the redesign of my website and I wanted to take a moment to talk about one of the unexpected issues I encountered during the launch and how I was able to overcome it.

So, one of the portfolio sections is for my video work, so obviously there are videos hosted there. I wanted to avoid the issues that using flash for viewing videos can create so I decided to use HTML5 to hold and view the videos.

While I was developing and programming the new design for the website, I made sure to test my HTML5 video players in Firefox, Chrome, and Safari to make sure everything was working as it should. I included reference to both a .ogv file for Firefox & Chrome as well as a .mp4 file for Safari, and tested frequently and everything seemed to be working fine.

Then, last week, I started uploading all the new files for the redesign. I made sure to recreate the exact file directory that I had been using locally to prevent links from becoming broken and then I uploaded everything. Once all the uploads were complete I started going through the website to make sure everything was as it should be, and things looked great…

Until I went to test the videos. The players seemed to be working fine, but they weren’t pulling the video files, so I went back and re-uploaded them to make sure that there hadn’t been a problem with the first upload. I checked again and they still weren’t working. I knew that I hadn’t changed the path and the file directory had been correctly set up, so I wasn’t sure what could be going wrong.

So I started troubleshooting.

I was afraid that the video file itself may have become corrupt somehow. I had been testing the live site in Firefox, and I couldn’t test on Safari because I didn’t have access to a Mac at the time. But I could test in Chrome.

So I opened the live site in Chrome and to my great surprise, the videos were working fine. So right away I knew that the files and the path weren’t the problem. Also, because Chrome supports the .ogv file format in HTML5 video like Firefox, I knew that the problem was apparently browser specific. So I did a little research and found that Apache doesn’t know how to handle .ogv files in Firefox yet so it generates them as text files which, of course, wouldn’t play as video. I also found that by adding a few little lines of code to the server’s httpd.conf file, I could add support for .ogv files in Firefox and fix the problem.

If only it was that easy.

I started trying to find the httpd.conf file in my FTP directory, but it was no where to be found. After some more research, I found out why. Because my website is hosted on a server with other websites, my hosting service won’t allow me access to that level of file because it would affect the entire server and everyone else websites. The only way I could access such a file would be if my website was hosted on a dedicated server.

So basically, I knew exactly how to very easily fix the video problem, but I couldn’t actually do anything about it without upgrading my hosting account to a dedicated server. Which would cost me about $1200.

Now I should probably mention that at this point because of finals at school the week before and trying to get this redesign finished by the deadline I had set for myself, I had barely slept at all in over a week. And I had specifically designed the video section to support HTML5 instead of Flash, and I had just learned that without upgrading, I was going to lose video support in Firefox, which accounted for about 41% of browser usage in 2011.

Which meant that my reaction to this realization was something like this: I was pretty much at an impasse. I didn’t know what I was going to do, but I couldn’t just let all the work I’d done be for naught so I did some more research…

And that’s when I discovered how to create a .htaccess file. This file can be used to configure the server like a httpd.conf file, but it can be placed at the directory level instead of the server level. Which meant I could add the configuration code for .ogv video files there and simply upload it to the highest level of my directory.

So I added the code and uploaded the file and I tested in Firefox and the videos worked !! I was so relieved I literally nearly cried. Since then I also learned how to use .htaccess for other cool things like URL Rewriting and page redirecting.

Having an unexpected problem like this isn’t exactly great, but I not only fixed the problem (without spending a dime, let alone $1200), I also learned something new and useful in the process. Which is what creative problem solving is all about.

So I finally got new glasses.

They are red and over-sized and more than little bit hipster, but I can’t really bring myself to care. I think they’re awesome, so whatever.

I typically wear contacts when I go out and only wear my glasses around the house anyway. But, I had been wanting some new glasses (with my updated prescription) that I could wear out for when I want to add a little geek-chic’ness to my wardrobe.

I finished the graphic design piece I posted about before. I’m really happy with how it came out. 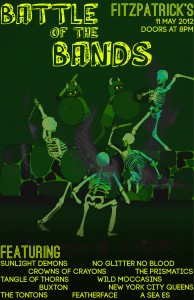 I created this poster as graphic design piece for my portfolio. I started by sketching out the illustration and then drawing the line-art. After that, I scan the drawings into the computer and cleaned the lines up in Photoshop. I also added some effects with some layer overlays. Lastly, I added the text in Illustrator.

The fictional music venue mentioned in the poster, “Fitzpatrick’s,” is a reference to Fitzgerald’s, a actual music venue in Houston. Also while the first five bands listed on the poster (Sunlight Demons, No Glitter No Blood, Crowns of Crayons, The Prismatics, & Tangle of Thorns) are fictional, the last five (Wild Moccasins, Buxton, New York City Queens, The Tontons, Featherface & A Sea Es) are actual local Houston bands.

1030 = the number of bones you have to draw when you want to illustrate a quintet of reanimated skeleton warriors. 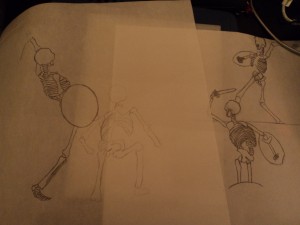 Something I’m working on right now…

…but things are finally coming together. 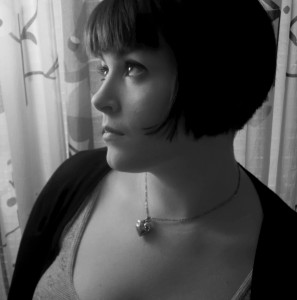 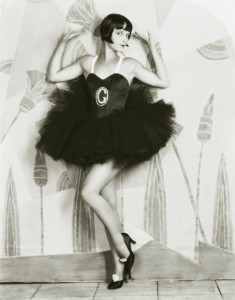 I’ve recently been enamored with old Hollywood actress and Brooks is only one whose been inspiring me lately.

Welcome to WordPress. This is your first post. Edit or delete it, then start blogging!